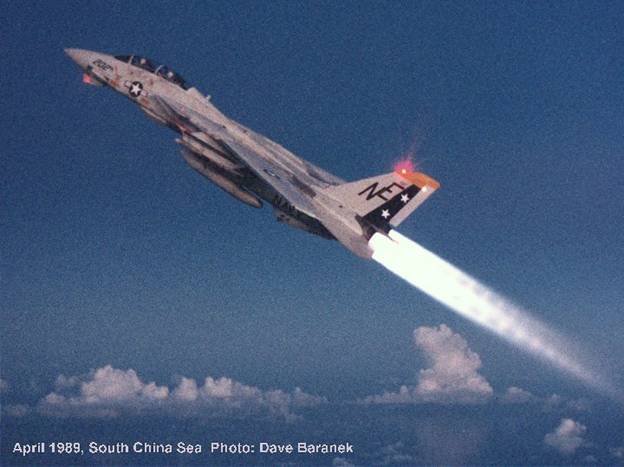 It was April 1989 and I was deployed with the VF-2 Bounty Hunters aboard USS Ranger, passing through the South China Sea off the coast of Vietnam. I was scheduled for an evening combat air patrol (CAP) mission as a flight of two.  After launch we were to take station about 150 miles from the ship in case anything came out from Vietnam.  Soviet MiG-23 Floggers, Bears, and Badgers operated regularly out of Cam Ranh Bay at that time.

I had been taking photos since I started flying in Fleet squadrons eight years before, and I saw a golden opportunity for a great shot of the F-14's magnificent afterburners. I was a Lieutenant Commander (O4) but since I was flying with a junior pilot we were the wingman. But as the senior person in the flight I was the mission commander. The lead was my pilot from the previous deployment, and we figured we'd have a little extra fuel, so after the mission brief I described a photo set-up we could execute on the way out to our station. Everyone agreed to my plan.

My aircraft launched first, at about sunset. We climbed to 10,000 feet overhead the carrier and waited for our lead. He joined up, took the lead, and we headed toward our station. But rather than climb immediately we stayed at 10K until we were a few miles from the ship. Then using hand signals and our second radio we coordinated the photo shoot exactly as I had briefed it. By now it was fairly dark, 10-15 minutes after sunset. Lead manually swept his wings to about 50 degrees; my pilot kept the wings in auto so we would have a maneuvering advantage. The flight stabilized at about 300 knots, and lead selected full afterburner ("zone 5") while pulling his nose up about 30 degrees. I had asked him to pull the nose up for two reasons: (1) control airspeed for smoother flying while I took photos, and (2) I knew it would look cool! As soon as we stabilized in the climb I started taking photos. I told my pilot, "Move up...good." "A little forward." "A little down...good." I was clicking away with my auto-winder, but it looked so cool that a few times I pulled the camera down and just looked. I could clearly see the discs of shockwaves in the burner plumes, slowly moving forward and back as our speed and altitude changed. The burner plumes didn't look like fire, they looked like bright glowing cones about 50 feet long. In just a few moments - maybe a minute? - I had shot all 24 frames of film, so I came up on the radio and said I was good. We were near our CAP altitude of 25,000 feet so both pilots went back to normal mode of operation.

Soon we stabilized and checked fuel. Oops, we had used all of our mission fuel reserve. We checked for aerial refueling, but none was available. It was a pitch black night as we slowly headed to our station. In my cockpit we started to think of a story about what happened to our fuel...but we never needed it. We orbited silently waiting for visitors that never came. About an hour and a half later it was time to head to the recovery pattern and start our return to the ship. A few days later we pulled into Singapore and I got my film developed, to see one of my personal favorite photos.

The day would have been even more memorable if I had been able to play with the Vietnamese MiG-23 Floggers that came out during daylight, but due to an aircraft problem I could only listen to the action on my UHF and watch my buddies' videotapes....