The birth of the Tomcat logo began in the early '70's by a request from Norm Gandia (former No. 5 slot, Blue Angel). He asked me to draw a lifelike Tomcat wearing boxing gloves and trunks sporting a six-shooter on his left side; where the guns are located on the F-14, along with two tails. The name "Tom" was taken from Chief of the Joint Chiefs of Staff, Thomas H. Moorer, and Chief of Naval Operations, Thomas F. Connolly.

I took my camera and went out in search of a mackerel tomcat. I visited several dumpsters found in the rear of restaurants, this at the time that an oriental restaurant on route 25, was exposed in Newsday for using cats in their cooking. (Since several cat heads were found in their dumpster)

I went to the rear a seafood restaurant in hopes of filming a feral tomcat. No luck. But a brute with a dirty apron came running out and asked what I was doing with a camera at his dumpster. I told him I was looking for cats - wrong answer. He yelled out, "We ain't got no cats here." He could be heard for a mile. Jumped in my car and took off. Very sensitive subject at the time.

I visited the local animal pound in Bay Shore and asked if they had any stripped cats. No, but there was one running around their parking lot that answered my description. I went out and immediately found the little guy, a perfectly stripped young mackerel tabby. It wasn't long before we became buddies and I photographed him from all angles. I placed him on the roof of my car and he immediately found the indoor setting more comfortable; guess he was looking for a home. I managed to pick him up and take him away from the car so that I could leave. It took several tries before I finally succeeded. I scratched all the way back Grumman.

I did several drawings showing the "Cat" including coming in for a landing on a carrier. (riding the rails), hiding behind a cloud waiting to pounce on a MIG, on a tight wire to show the agility of this "Cat", and one showing the "Cat" flexing his muscles.

Dick Milligan found a lion cub drawing in a dollar cartoon book and decided to use this drawing in place of the original request. It was a good request and we went with that pose and added stripes to the cub to make it appear like a tomcat.

As for "Anytime Baby," slogan, Norm Gandia came up with that blurb as a challenge to the U.S. Air Force F-15 Eagle. We also did an illustration of the Tomcat rear-ending the Eagle with the word "Gotcha."

Norm Gandia was the driving force behind all Tomcat printed material. Any item involving the Tomcat was generated by Norm. 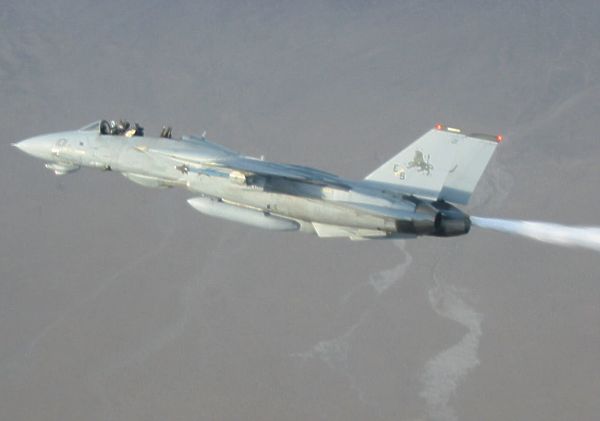