by Capt. Dale "Snort" Snodgrass
This article was first published by SimHQ.Com in August 2000. With kind permission of the author.

From a combat perspective, it was when I had a flameout over Iraq while executing a last ditch surface-to-air missile defense. I was leading a night Fighter Sweep in support of an A-6 strike on a power plant on the north side of Baghdad. My flight had flushed a couple MiG-29's and we were in "Hot Pursuit." My ECM and radar warning gear had been lit up like a X-Mas tree, so I was vigilant in jinking in altitude and heading, while rolling and visually checking for missile plumes. During one check, I saw a missile clearing the haze and undercast below us. We were 25-26 thousand feet at the time and the undercast was broken around 13-15 thousand. Net result...not a lot of time to see and react to a Mach 4 missile. Fortunately I was looking at the right piece of sky as the missile cleared the clouds. I immediately saw it had constant bearing and big time decreasing range. I immediately rolled the Tomcat into the missile and pulled 8-10 G's while deploying chaff to aid in breaking the missile's radar lock. The missile exploded just above and behind me. The missile defense worked as advertised (though it was really, really close). Unfortunately the F-14 has a tendency to depart controlled flight when a very hard rolling pull is executed at high subsonic airspeeds (I was at .95-.97 IMN). It is exacerbated with external stores, and I had two external fuel tanks and six missiles loaded. I was able to recover the jet quickly, but in the process I lost my right engine. The recovery had cost me almost 15,000 feet and 300 knots. I was now slow with one engine thrustless and in the middle of all that pretty Triple-A gunfire that was shown on TV every night! I was too slow to get a good airstart attempt on the engine and didn't want to go into full afterburner on the good engine, as the only fighters with one afterburner that could be airborne that night were Iraqi! With MiG's in the area I didn't want to be mistaken for TARGET!

I wound up going to min afterburner on the good engine, while descending deeper into Triple A "sparkles," in order to get the requisite airflow to relight the engine. Once making heat and fire again, I climbed out with both engines in full afterburner. Though obviously tense, the previous event never seemed as tense as operating around the ship at night in bad weather as your fuel gage reaches low state, compounded by problems on the flight deck, and you being number 10 for recovery. Not to mention there is no divert airfield because the nearest land is 300 miles away!

One night, I was very low on fuel, the weather was terrible, and the deck was moving 15-20 feet. I was waved off twice because of a fouled deck…something that had nothing to do with me. I boltered (touched down just passed the wires) on my third try and went around for a fourth time. It was a really ugly pass…the deck was moving a lot and I was feeling more and more stress due to my rapidly dwindling fuel and no tanker available. I got it on deck with less than five minutes of fuel remaining. The thing is, though...almost every carrier pilot has a story like this. Ask any carrier aviator and they will tell you, life at the back end of the ship is one part thrill, one part chaos, and one part stress. Only the strong survive. It's simply the toughest aviation environment in existence. 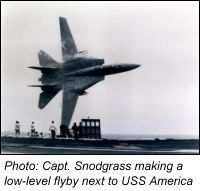 Capt. Snodgrass' Tomcat career spanned a quarter of a century and allowed him to become the high time Tomcat Pilot with over 4800 hours in type and 1200 plus arrested landings. Squadron tours included VF-124 (initial Training), VF-142, VF-101 (Instructor), VF-41 (CAG LSO), VF-43 (Adversary Pilot), VF-143, VF-101 (XO/Instructor), VF-33 (XO/CO). As Commanding Officer of VF-33 he lead the squadron in combat during Desert Storm. His combat sorties included leading 34 strikes into western and central Iraq. In 1994 he took Command of Fighter Wing Atlantic and the NAS Oceana based F-14 Squadrons. In 1995 the West Coast based Squadrons were single sited to Oceana and he gained Command of the entire Tomcat Community.

The Birth of the Tomcat Logo

The birth of the Tomcat logo began in the early '70's by a request from Norm Gandia (former No. 5 slot, Blue Angel). He asked me to draw