Our primary purpose is to maintain contact among the members of the Tomcat community, keep members informed of developments in Naval Aviation, provide support to museums where F-14s are on display, and sponsor annual reunions of the F-14 family. Membership is open to anyone who has flown, worked on, or just plain love the F-14 aircraft.

This website is dedicated to the aircrews who risked their lives fighting for our freedom, the maintainers in the hangars and shops who kept these jets flying, the managers and support personnel who continually found the funds and supplies needed to hold it all together, and finally, the engineers, scientists, technicians and artisans who designed and built the F-14 and who through the years came up with the improvements to keep it in the air for 36 years.

Here is your chance to be part of F-14 Tomcat history!   The F-14 Tomcat Monument Association is leading the effort to construct a monument to the greatest fighter that ever flew.   Please check-out their website and make a contribution.   Any donation is appreciated!  There are also donation levels that will get your name inscribed on the memorial - a great way to forever mark your support and love of the Tomcat.   This is also a unique gift opportunity!

Please check-out the latest release of Tomcat News!   Members of the F-14 Tomcat Association can access the newsletter from the Newsletter link (under the "Members Only" menu). 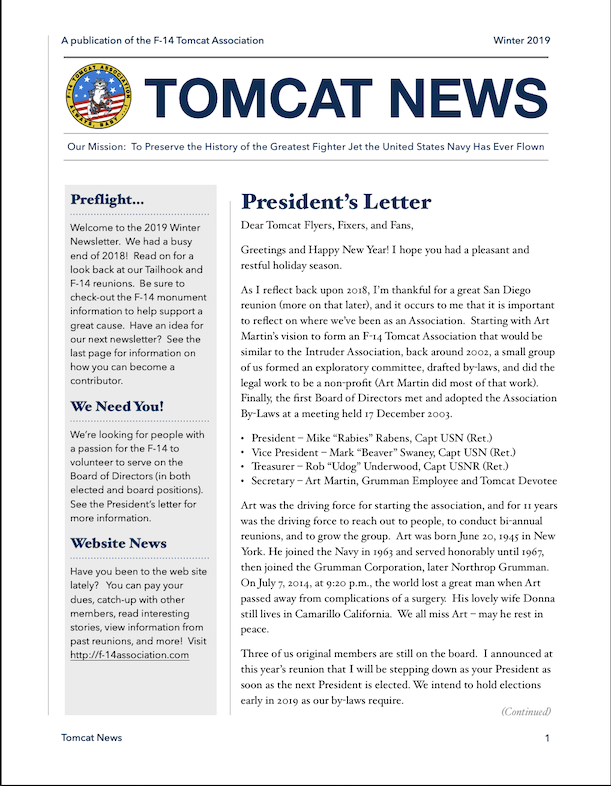 The Last of the Jolly